The Trismegistos database (https://www.trismegistos.org) contains the metadata for ca. 737.000 texts written in Greek, Latin, Demotic, Coptic and other languages from the whole Roman empire and beyond. For the Greek and Latin papyri and ostraca from Egypt we have a close collaboration with the Papyri.info platform (http://www.papyri.info) that provides the full text of ca. 58.000 of these documents. This corpus of full texts contains 4.885.874 words, that were each grammatically tagged by Alek Keersmaekers. Mark Depauw and Herbert Verreth provided further labels in this Filemaker database for words such as 'day', 'month', 'year', 'hour', and for the names of months, kings, emperors, consuls, eponymous priests, etc.

As a test case the 2866 papyri and ostraca were selected that have been published in the BGU series. In these documents all chronological indications were tagged with a no. (1) for dating formulas and references to specific moments in time; no. (2) for years indicating the age of a person; no. (3) for chronological ranges ('from Thoth till Mecheir'), more general indications ('the taxes for year 5') and general expressions ('today', 'now', 'next year'). It is clear that the distinction between group (1) and (3) can sometimes be vague. Since GODOT is mostly interested in group (1), groups (2) and (3) will not be further analysed for the moment. 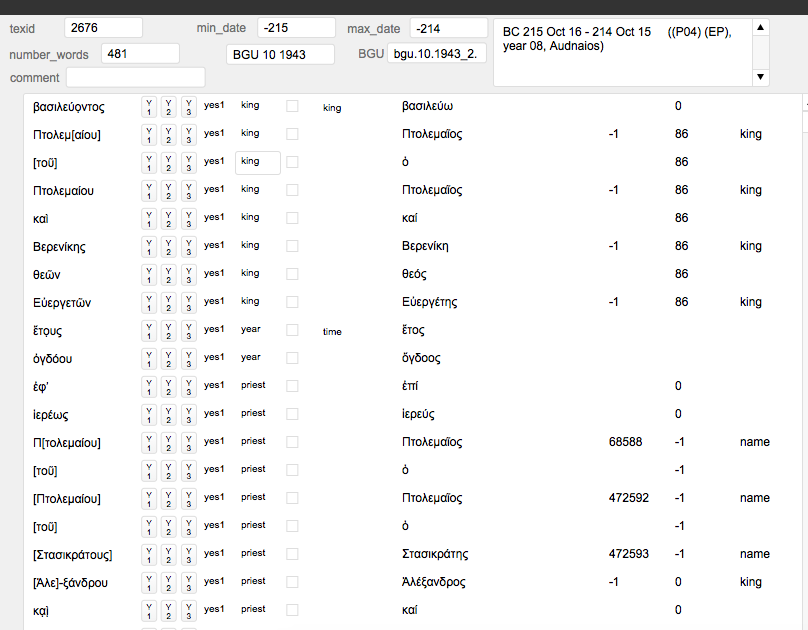 Every group of consecutive words with the same tag forms a chronological cluster (e.g. 'in the year 9 of Septimius Severus', 'on Thoth 28'). The words of these clusters are individually labelled as year, month, day, king, priest, consul, indictio, era, or hour, so that it is possible to reconstruct the meta-structure of the dating formula (e.g. 'year 28, Mesore 4' = year / year / month / day). This detailed analysis will enable all kinds of queries for the future user.

Every king and consul mentioned in these dating formulas has been identified and linked to the existing TM database of 'Eponyms' (3312 entries), that has been expanded when necessary. Every eponymous priest has been linked to his corresponding TM Person id, which gathers all the attestations for that priest. These identifications make it in many instances possible to exactly convert the chronological clusters to a specific date in our calendar.

To model the information about months and days a new database was created. For every calendar system discussed in Samuel, Greek and Roman chronology, 1972, fourteen cards were created, one for every of the (usually) twelve months, one for the intercalary month and one for the uncertain cases, so that every month in every calendar gets a unique identifier (2116 entries) (e.g. 'the 4th month of the Egyptian calendar'). In a second file every name for a month or a day has been listed (523 entries) and linked to the different calendars where it occurs (e.g. the month name Hyperberetaios occurs in 14 different calendars). Every month name in BGU has now received an identification that ascribes it precisely to a certain calendar and its place within that calendar.

It is our intention - in due time - to tag the remaining 55.000 texts from Papyri.info in the same way.